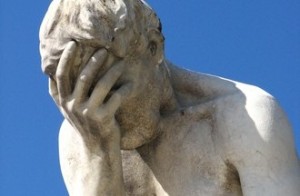 Recently, I had the opportunity and privilege to write an article for the Church Technical Leaders website

I wonder if you have ever been standing in the place of failure. Here’s 3 examples from my experience..

Like monsters in an old Stephen King movie — hidden under the stairs or perching on top of shelves in the back of the closet — they haunted me.

Lying awake at night, they whispered my name.

Eventually, against all reason and sanity, I moved in and took a look.

And that’s when it hit me… if you find yourself standing next to a box of miscellaneous parts and pieces from an install two years ago, you’ve already failed.

Finish it later is one of the cardinal sins of technical production. I get it. We’re tired. We were under the gun to even get this much finished. Putting everything away will have to wait.
But as the well-worn saying goes, “if you don’t have time to do it right, when will you have time to do it again?”

I guess the silver lining here is that at least we got the job done. Only we didn’t. It would be better to not be standing there in the first place.

I was helplessly watching as two ubernerds discussed the finer points of their latest D&D adventure. At another place, at another time, their mastery of strategy and analysis may have been impressive. Who am I kidding? It was hell. Our conference was in progress and I was rushing to pick up a convertor and high-tail it back to the church. An eternal mission was in jeopardy in the quicksand of the world’s worst customer service.

You see, I was in Radio Shack. If you’re standing in Radio Shack hoping to get something that will save the day, you’ve already failed. I may be kicking an American icon while they’re down, but I’m really kicking myself.

As much as anything else, our job is about planning for contingencies. Running to Radio Shack, or sending someone else—at the last minute, or while the show is going on—means we missed it. Sure, the humiliation of being one-upped by a snarky, over-enunciating wannabe is unpleasant. But knowing that you’re spending $29.95 for a $3 part is the real humiliation.

At least there was a place to go for that converter, but it would be better to not be standing there in the first place.

I found myself standing next to a fist-sized hole in the drywall (OK. It was more like a crack or a slight depression, really, but that doesn’t sound as impressive, does it!). How much humiliation can one person absorb? How much last minute, pie-in-the-sky thinking am I really expected to handle? On a Sunday morning… 2 minutes before the first service…

If you find yourself punching something, you’ve already failed.

Though I’ve mellowed in the last 20 years, I have a temper. It usually shows it’s ugly face when I feel taken advantage of or disrespected. After months of putting up with demeaning behavior from others, I have blown it.

I do not believe that the tech team is supposed to absorb the worst in everyone else and pretend that everything is OK. The truth is, I’ll put up with a lot on Sunday, but if I’m not having a follow-up conversation to correct expectations and assumptions during the week, that’s on me. The church doesn’t burn us out. We do that to ourselves by failing to set appropriate boundaries. When we resemble a pressure keg, waiting to explode, we are the ones who have to adjust.

A case could be made that it is better to break your knuckles on the wall than throat chop a pastor, but it would be better to not be standing there in the first place.

We have all stood beside failure. The beauty is that we don’t have to sit there. We can walk to new opportunities wiser and better. Acknowledging mistakes is a start. Apologizing when we mess up is appropriate. Taking steps to avoid standing there again is even better.

The axioms these scenarios reveal are worthy of attention: Finish it Now, Planning is the Real Work, and Protect Your Heart.

Standing firmly in those simple truths is a great place to be.

Failure sucks. Even more when it can be avoided.

One of the greatest antidotes to failure is to surround yourself with people who will offer support, encouragement, and challenge your assumptions. The community of Church Technical Leaders is a great place to get advice and let off steam. Check it out.

Do you have your own failure stories? Agree or disagree with my viewpoint?
Do you have a lesson you’ve learned the hard way you’d like to share?

Let me know in the comments below.