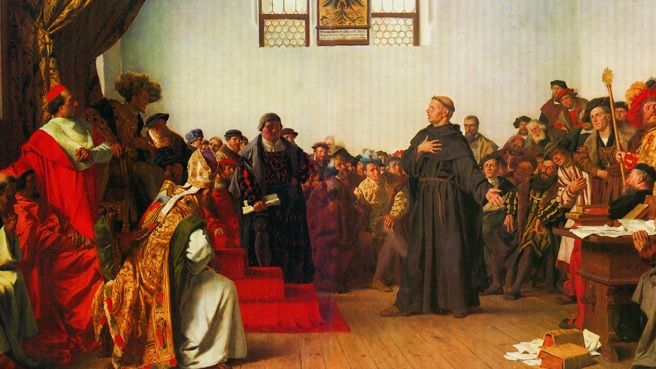 “Here I stand I can do no other. God help me. Amen.”
~Martin Luther

It’s a statement of extreme. It’s a declaration that you will die on this hill, fight until your last breath, be willing to lose everything to not lose this one thing. Here I stand, I can do no other. My conscience is convinced. It is nonnegotiable —something not open to discussion or modification.

What are your non-negotiables? What hill would you die on? And are you sure you are on the right hill?

As you can imagine, it is something I have thought quite a bit about. As I get older, I find less things non-negotiable. However, I would say, I have moved from many ideas to bigger ideas. YMMV. Let’s see if any of these resonate with you and I would be interested in hearing your thoughts, too.

1. The Bible is primarily about Jesus, and He is our filter for what it means.

Although this point seems really obvious, it is not obvious when you look at distortions that are happening and have happened in the name of the Kingdom of God. If you cannot imagine Jesus doing something, then God wouldn’t do that either — or ask others to do it in His name.

I am concerned about an interpretation of the Bible (and by extension, a viewpoint of God Himself) that places Jesus as an unobtainable, transcendent ideal. This is precisely what we cannot do as Christ followers. We must accept a Jesus that is human—fully in the mess of everyday life, fully aware and tempted, fully in the human experience. The life of Jesus is the life offered to us as His followers. Or I could say that stronger, the life of Jesus is the life expected of His followers (they hated me, they’ll hate you, etc).

Making Jesus the primary revelation of God (something the Bible itself tells us to do) changes how we read the Bible and what we think the Bible is and what the Bible is supposed to mean, or do, in our lives.

The Sermon on the Mount is Jesus telling us what the Kingdom of God looks like as it mirrors God Himself. Let’s get after it and stop making excuses.

I was tempted to change this point to full and equal-measure gifting for everyone, but that waters it down. A primary mark of the Spirit’s presence is the annihilation of patriarchy in any sense of the word. Patriarchy is malarkey.

Walls come down when the Spirit is properly attended to—and I believe this is born out in history as well as any honest examination of revival in any country on earth. The Spirit’s presence is incompatible with racial, economic, and patriarchal barriers and preferences.

We are contending for a restoration of the world to God’s intention. Although we live in a fallen world, we live as members of the age to come. You cannot get to the age to come by systems of oppression and exclusion that are part of the fallen system. In the Spirit, worldly categories and dualistic structures submit to unity in Christ. Within the unity directive is a cultural sensitivity and humility, but also a refusal to bow to cultural idols as a compromise to social pressures.

The same demonic manipulation that used the Bible to defend chattel slavery is the same spirit behind a hermeneutic that disempowers womankind and makes them subservient to mankind. We haven’t gotten this principle right yet, but this is one we must hold to as beyond modification.

3. The primary metaphor for the Church, as residents of God’s Kingdom on earth, is a family made from a new kind of human being.

What I mean by this is that a Christian community is literally an extended family formed under the headship of Christ, filled with the Spirit of God — and thus, a new kind of human — with all the joy, mess, hardships, camaraderie, etc the metaphor can engender.

Though the Church is an organization, it is not a business in the common sense of the word. Therefore, business principles from the marketplace can teach us how to be effective and efficient (something that is as culturally important to Americans as head coverings were to Greeks, but I digress), but they cannot ultimately teach us how to do the business of the Kingdom of God.

There is nothing wrong with being clear about what we are doing, like deciding the methods and strategy and tactics that we should do. There is also nothing wrong with measuring our results to see if they are working. I could make that case from scriptures about counting the cost (or in Luke 15, which involves a lot of counting— via A. J. Levine). It may help if you think of this as an accounting as much as just counting numbers (like the parable of the talents). All of that would be consistent with what a family would do.
The challenge arises — if I can say this simply— when we count to a standard that is different than the accounting standard of the Kingdom of God. When we use a different set of scales than God’s scales, we measure the wrong things. We will be found wanting.

The church’s primary responsibility is not to control government to ensure non-Christian people are living according to the Bible. The church is the family formed under the headship of Christ, indwelt by the Spirit, living their lives as a witness to God’s love and cooperating with Him in restoring the world.

Christianity, then, is not a method of organizing government as a set of ethical principles codified in laws, or a list of moral directives that will help people live a good life. Christianity, as a way of life, is how this unique family lives: the characteristics, marks, style, and story that demonstrate the Lordship of Christ among this group of people.

The cooperation and affection inherent in the family metaphor is modeled in the Trinity itself, prioritized in the creation story, exemplified through the family of Israel, embedded in Jesus’ teachings and life with His disciples, and applied as a new way of being human in the Epistles.

This is why how we care for one another is so important.

4. How we treat each other is more important than what we do for God.

Another way to say this is how we treat each other is our work for God.

Too often the Christian communities stance amongst itself is one of posturing and positioning in trying to prove we are right. How gross! This is absolutely antithetical to Jesus. If we cannot even obtain a modicum of neighborly affection and generosity towards one another in the family, we are not coming close to extending that to the world. In fact, from a pragmatic position, I would say this is the biggest issue in evangelism. Although it often gets the most press, forget science as an intellectual stumbling block to Christianity as our biggest hurdle. Instead, consider this. If something is true, it should work. If Christianity is true, it should work. We don’t treat each other in a Christlike way, and so nullify the entirety of what we proclaim. It’s an incredibly serious issue.

The ends do not justify the means in Christianity. Manipulation or spiritual abuses are not excused by salvation numbers. Well, too often they are, which is a problem and a sign that we are not operating within the boundaries of the Kingdom of God. On the flip side, too often a standard of love means we do not confront each other for sin or incorrect behavior. This is wrong and ultimately not loving at all. If we are doing a work of God that causes us to work in a way that is less than loving, we are not doing a work of God at all. That’s the point. Thank God He redeems our efforts that miss the mark, but that doesn’t get us off the hook.

There is another challenge embedded in this point for those of us who live in the U.S. American Christianity is susceptible to the cultural idol of rugged individualism [this may be true the world over, but it doesn’t seem to be to the degree it is here. I can only speak from where I’m standing]. This rugged individualism is the opposite of neighborly love. This rugged individualism is often phrased in recent public discourse as personal responsibility. That’s disconcerting to me. From Cain’s incorrect assertion that he was not his brother’s keeper, to Jesus reinforcing neighborly love as the greatest commandment; this American ethos of personal responsibility seems to more closely mirror the cultural idol of individualism than Christianity. This mantra ultimately means people are only responsible for themselves, and let’s be honest, it really means people who could use my help are in actuality responsible for themselves in a way that I am not at all responsible for them. This is the opposite of neighborly love and neighborly generosity.

But are people solely responsible for themselves, or even primarily first and foremost responsible for only themselves, or are we our brother’s keeper? I wouldn’t side with Cain on this one, right? I find it odd that the words “personal responsibility” have come to mean what someone else is supposed to do so I don’t have to get involved. If that doesn’t seem strange to you, think about it a little more.

The way we treat others, especially those who don’t deserve it, is our work for God. After all, we don’t deserve it either. We freely give as we have received. That’s our mantra.

So what should we make of all this. I am not completely sure. I debated long and hard about posting this. I’m wondering who cares? Still it seemed like something worth thinking about, and something I hope others are thinking about.
It’s very important who we journey with on this road of discipleship. These are the most basic of basic things to help me make sure I am traveling with the right people.
And just because we know what our ideals are, that doesn’t mean we write people off for making mistakes. But a continued pattern of behavior, with no willingness to repent and turn? No. Life is just too short to align with ministries that are, in the end, not even ministries at all.

It’s hard. It hurts. But frankly, some hills are worth dying on. Calvary was one. I shouldn’t be that surprised if I find myself on one as well.

Here I stand I can do no other. God help me. Amen.